The last Mexico Mix column looked at why Mexico’s drug-related violence has recently spilled into tourist destinations. This time, we’ll look at why that shouldn’t stop you from traveling to Mexico.

No, we’re not recommending a holiday in beautiful downtown Ciudad Juárez, Chihuahua, or a romantic getaway in Tecalitlán, Jalisco. Even I admit that when I had to fly into Acapulco and drive across the city on my last trip to Mexico, I was just as happy not to be lingering there. 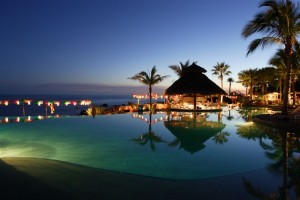 But it’s still true that drug gangs are not targeting tourists now any more than they ever were. And even if the barrage of headlines makes it sound as if the entire country were in flames, the violence that feeds Mexico’s death toll takes place primarily in just nine of 31 states — mainly along the U.S. border where the smuggling takes place and in places where marijuana and heroin are produced.

The concept hasn’t changed: Stay away from the trouble spots and exhibit some common sense, and you’re more likely to perish in a tequila-fueled Jet Ski mishap than at a homicidal drug trafficker’s hands. What makes this concept more complicated today is that you can no longer rely on the common wisdom about sticking with established tourist destinations.

Until this year, the public had to rely on media tallies of drug-related killings or on sporadic and often confusing numbers compiled by various government agencies. In January, the Mexican government made the task easier by releasing a comprehensive official database of drug-related deaths — including gang members, police, soldiers and bystanders — each year from the beginning of Calderón’s term in December 2006 through the end of 2010. In addition to the alarming numbers in those nine states — ranging from 40 (in Michoacán) to 297.5 (in Chihuahua) deaths per 100,000 people — it shows that modest homicide rates prevail in much of the country.

Here’s a closer look at the top five:

1) Tlaxcala (1.1 deaths per 100,000): Mexico’s safest state is also its smallest, tucked just east of Mexico state like a notch in Puebla’s side, with the Sierra Madre Oriental dominating its eastern boundary. It is an agricultural state with a significant tourism industry made up mainly of Mexican visitors and a smattering of history-minded German, French and Swiss travelers. Its primary attractions, barely known to U.S. tourists, are precolumbian archaeological sites such as Cacaxtla and colonial architecture in and around the capital city of Tlaxcala. The state has more than 1,000 archaeological sites, only seven of which are open to the public. It’s tailor-made for travelers hankering for an authentic cultural foray safely removed from the hordes.

2) Yucatán (1.3): The land of the Maya is arguably Mexico’s most beguiling state, and its safety is icing on the cake. (Drug-related deaths doubled in 2010 — from 1 to 2.) Despite being overshadowed by Cancún and the Riviera Maya in neighboring Quintana Roo, the Yucatán has a well-developed tourist infrastructure, thousands of archaeological sites, refreshing cenotes, grand haciendas, uncrowded beaches, stunning wildlife, widely varied ecotourism and unfailingly gracious people. You could visit every year for the rest of your life and never run out of things to do and see. If you’re still wary of going to Mexico, think of Yucatán as a country apart — many of its residents do.

3) Puebla (1.85): It’s the home of both mole poblano and chiles en nogada, the ambrosial national dish made of poblano chiles filled with spicy meat and fruit, smothered in a walnut cream sauce and topped with pomegranate seeds. What more is there to say? Well, perhaps that it is also home to the twin volcanoes Iztaccíhuatl and Popocatépetl, site of the battle commemorated by Cinco de Mayo, home of Talavera pottery, 2,600 historic buildings, a wealth of archaeological sites, and virtually nonstop festivals originating in five distinct prehispanic cultures.

4) Querétaro (2.02): Also among Mexico’s smaller states, Querétaro is one of the most geographically varied, ranging from desert to tropical rainforest. The capital, Santiago de Querétaro, was designated the “third city of New Spain” in 1531 and is a trove for history buffs. It is best-known, however, for its role in ending Spanish rule. Overshadowing such momentous events as Maximilian’s execution or the signing of the Treaty of Hidalgo and Mexican Constitution, its greatest source of pride is being the place where the fathers of independence plotted to overthrow the Spanish. Ecotourism is the mainstay of the Sierra Gorda biological reserve. The state also claims three of Mexico’s major wineries and maintains a Cheese and Wine Museum. San Sebastián Bernal, whose Peña de Bernal is the third-largest rock in the world, is one of Mexico’s Magic Pueblos.

5) Baja California Sur (2.98): In a classic case of guilt by association, tourists have avoided the southern half of the Baja peninsula in droves because Tijuana — 900 miles away in Baja California (Norte) — was the first flash point when Calderón upset the drug cartels’ equilibrium. In fact, Baja Sur has been barely touched by drug violence. If Los Cabos isn’t your style, you can hightail it up to artsy Todos Santos, satisfy your urban longings in the authentic Mexican city of La Paz or repair to the East Cape, a still-rugged area favored by divers and fishermen, where active types and fans of primitive, wide open spaces will find hiking, kayaking, surfing and windsurfing, zip-lines, cave paintings and hot springs.